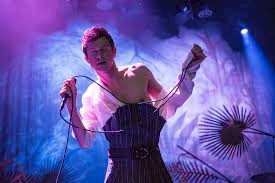 Hadreas was featured on the cover of the March/April 2017 issue of The Fader, which included a lengthy feature on Hadreas and his work on his next album.In the weeks following the article, Hadreas posted a number of video and audio clips teasing new music. On March 21, 2017, Hadreas announced his fourth studio album No Shape and released the first single "Slip Away", which was accompanied by a music video directed by frequent Björk collaborator Andrew Thomas Huang.The single was designated "Best New Track" by Pitchfork.On April 19, Hadreas released another single from the album called "Go Ahead" during a live Twitter Q&A with fans.

No Shape was released via Matador on May 5, 2017. It was produced by Blake Mills (Fiona Apple, John Legend, Alabama Shakes) and mixed by Grammy Award-winning engineer Shawn Everett. The album was praised by critics. Pitchfork awarded it an 8.8 and named it "Best New Album", deeming it "his most realized album yet, a tender and transcendental protest record of love and devotion."The Guardian commented that "No Shape sounds like a unique talent coming into full bloom."

On May 9, 2017 Perfume Genius released the video for "Die 4 You", directed by Floria Sigismondi.[30] That same month, it was announced that Perfume Genius would curate a part of the line-up for Le Guess Who? Festival in Utrecht in November, for which he invited amongst others Aldous Harding, Mount Eerie, Weyes Blood, and Bulgarian women's choir Le Mystère des Voix Bulgares.

In 2019, the track Otherside was used in the trailer for the film The Goldfinch, adapted from the Donna Tartt novel of the same name.

On February 25, 2020, Hadreas released the single, "Describe". On March 16, he released another single, "On the Floor".Both songs were included on his album, Set My Heart on Fire Immediately, released on May 15, 2020