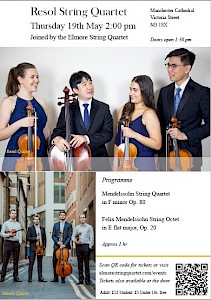 (Performed by the Resol String Quartet)

Tickets  for this concert can be purchased at  https://www.tickettailor.com/events/elmorechambermusicfestival/700832

Event details can be found on our website is https://www.elmorestringquartet.com/19-05-2022

The Resol String Quartet was formed in 2018 at the Royal Conservatoire of Scotland, receiving great acclaim when in 2021 they won the CAVATINA Chamber Music Competition. Based in Glasgow, the Quartet performs and teaches regularly throughout the UK.

Friends joined through their love of chamber music, the Resol String Quartet formed in 2018 at the Royal Conservatoire of Scotland, with a vision to make classical music making more inclusive both in the present and for the future. The Resol String Quartet bring their shared ideal of honesty to all that they do.

In a constant pursuit for excellence, these young artists share their joy of music making and act as ambassadors for chamber music, keeping it alive in today’s society. The group feel just as at home in education and care settings as they do on the concert platform and strive to blend all this work together. In the concert hall they approach their interpretations from a historically informed perspective, bringing a unique take on repertoire from all eras.

In May 2021, the quartet were awarded both the First Prize, and Audience Prize in the CAVATINA Competition at the Wigmore Hall, representing the Royal Conservatoire of Scotland. In the same year, they made their Perth Concert Hall debut, were named as one of Chamber Music Scotland’s ‘One’s to Watch’ and were accepted to work with Live Music Now Scotland. They also appeared live on BBC Radio Scotland’s ‘Classics Unwrapped’. In 2022 they made their Conway Hall Debut as part of their historic ‘Sunday Concert Series’.

The ensemble were invited to perform for the Brunton Chamber Music Recital Series in August 2020 with an immediate re-invitation for November 2021. The ensemble have also performed at the avant-garde venue Pianodrome in Edinburgh, and run three of their own concert tours across the UK. The West of Scotland tour was in collaboration with classical Saxophonist Richard Scholfield and brought a varied programme of original arrangements to rural island communities. This tour was funded by the National Lottery through Creative Scotland. Education is an important aspect of the quartet’s work. Their recent concert tours saw them visit 6 schools in the communities they visited.

Upcoming plans include collaborations with pianist Jia Ning and the Elmore String Quartet, concerts in Spain and Catalonia and an exciting project with Sussex based composer Julian Broughton, including a new commission.

Winners of the Tunnell Trust Awards 2020, the Elmore String Quartet (formerly the Freeman String Quartet) is a dynamic young ensemble formed at the Royal Northern College of Music in 2017.

These successes led to performances across the UK, performing recitals for Manchester Concert Society, the Lake District International Music Festival and the South Downs International Summer Music Festival, where they became the first ‘Quartet in Residence’ in 2018. The South Downs Festival presented them with the opportunity to learn with the Benyounes String Quartet, as well as giving the closing performance of the festival where they performed works by Smetana, Haydn and Glass in St. Andrews Church, Alfriston Sussex.​

In 2020, the Elmore Quartet were appointed as the RNCM’s Studio Quartet. They enjoyed an intense year of study, culminating in a second place finish at the CAVATINA Intercollegiate Chamber Music Competition in Wigmore Hall. During their time as Studio Quartet, they had the privilege of working with both Frederik øland (Danish Quartet) and Bruno Schrecker (Allegri Quartet).

In 2021, the Quartet were delighted to be appointed as Junior Fellows in Chamber Music at the RNCM for the academic year 2021/22. This position allows the Quartet to continue to work intensely together alongside coaching young chamber ensembles at the RNCM. This year, the Quartet have enjoyed touring Scotland as well as recording Joseph Bologne Concertante Quartet No. 2 as part of the BBC Philharmonic’s Diversity in Music programme for BBC Radio 3.

"Style, assurance and direction from the first bar - an interpretation whose confidence and polish didn’t preclude a sense of real drama." - Richard Bratby.